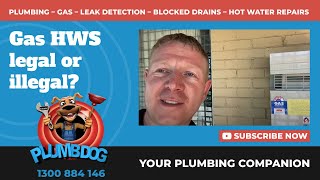 Todays job was originally to replace the a hot water system as a straight swap over.  Top dog Richard arrived at the property and noticed right away that the current system was in an illegal position. As gas fitters, there are specific requirements to adhere to when installing new hot water systems, even if one already exists, and the works of gas fitters are also checked which is a good thing to keep consistency and safety for the industry and our customers.

At this property, there’s only one openable side for the system as opposed to the normal requirement which is two.  It looks like that the system was installed years ago and later on when the owner added an outdoor area it blocked the other openable side.  It is very important that hot water systems are placed in well-ventilated areas. This will ensure that the combustible gases escape safely into the open air and into the atmosphere.  The gases that the system releases have carbon monoxide which is harmful to our bodies.  This gas is colourless, odourless and tasteless so a person would not even know that they are already breathing it until they either pass out or be the cause of death.

Richard identifies an ideal location for the new hot water system and finds an external wall not too far from the original site which means he will not have a hard time in terms of re-piping.  The new location has two openable sides and he also made sure that the measurements are followed according to the legal standards. This is following 500mm on all sides from corners, wall edges, windows, eaves and the floor.

All The Gear & Every Idea

One visit is all it takes to complete the hot water installation. No need for multiple trips because we made sure that our vans are equipped with high-quality materials, such as pipes, fittings and valves and advanced equipment to make sure that as much as possible our work is “done in one”.  The new system is installed in a new location compliant to the legal standards and safe for the client to use. All in a hot summer’s day work!