[How To] Clear A Blocked Shower Drain 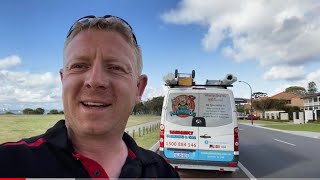 In the video, we were called out to a property in Myaree with a blocked shower drain. Our local Perth Plumber and top dog Richard shows how he efficiently and effectively located the problem area and cleared the blocked shower drain which also affected the water passage in the washroom.

Richard first visited the place and made a thorough investigation regarding where the drain was blocked. He then investigated the layout of the house before opening the threaded access points on waste pipes. He found that the blocked shower waste pipe and found that the main reason for blocking is the build-up of hair and tree roots combined in it.

We always say some of the most common causes of blocked drains are tree roots (which you would have seen from our other videos) and hair. At this job we had both. Yummy!

The hair naturally came from normal shower usage but the house also had a tree at the entry of the drain which the combination of tree roots and hair caused this blocked drain issue. After identifying the problem, Richard proceeds to clear, clean and remove all of the debris causing the blockage aided by having the right tools for the job.

It’s one thing to just remove and clear the problem area but having all the gear and every idea, we make sure it’s cleared properly and checked.

Don’t Panic, Give us a Whistle!

People often panic when they witness a blocked shower drain and try to think of quick fixes. More often than not simply pouring a drain cleaner bought at the local hardware store or a home made DIY solution will not do the trick. As you can see from the video, with the amount of hair buildup along with tree roots causing this blocked shower, a store bought drain unblocking solution will not do the trick.

If you’re in the greater Perth area and need a local plumbing expert, give us a whistle!